Before You Buy an Oura Ring (a List of Missing Features)

As one of the pre-order customers, I have accumulated already over 6 months of data with the second-generation Oura ring. I have a lot of good things to say about Oura, and I can confirm that I’ve managed to make positive changes to my sleep and recovery routines. However, I can’t say that the Oura system would be perfect yet – there’s room for improvement especially on the app’s side.

If you’re interested to see in-depth review of the ring, I recommend checking out videos from Bioneer and Alex Fergus. This is not a review, this is a list of things Oura is still missing. Call it a wishlist or feature requests, here are the 6 things you should probably know before buying an Oura ring:

Adding activities is still a mess

I’ll start by saying that Oura already does well many of the things I’m going to complain about, but only on iOS with Apple Health.  For a wearable that’s main purpose is to analyze recovery, it sure is difficult to tell the ring what you’re recovering from!

You can manually add “an activity”, which means you can add some type of a workout to the day’s log. So with manual fiddling, us Android users can do what Apple Health integration already does automatically.

However, when adding those workouts, available fields are activity type (very limited list including things like cycling, strength training, yoga, etc.), start time, duration and intensity (easy/moderate/hard). After you’ve input these, Oura adds – out of thin air – some burned calorie count to that workout. Presumably this count is based on type, duration and “intensity” of the exercise. But if you’re interested in measuring your sleep and recovery with Oura, the chances are that you’re also measuring our heart rate when exercising, so you already know the exact number of calories burned, as well as things like min/avg/max heart rates and what heart rate zones you have exercised in. But there’s no way of adding any of that to Oura app!

So you’re left with trying different lengths and “intensity” values until you get a calorie burn count in the app that’s close to the actual what you have measured. This means editing and saving each workout multiple times to get it right. (Adding calories is important as it affects other calculations and values inside the app.)

To add insult to injury, you can only add activities to the current day. Forgot to add your workout yesterday? Well you’re shit out of luck, son.

Adding a bit to the previous point, it would be really neat to get an on-demand heart rate tracking added to Oura. When jogging or cycling or doing other sports where you can wear the ring, you wouldn’t have to have an additional HR sensor.

UPDATE May 2019: Oura has added a sort of on-demand HR and HRV tracking, but it’s not intended for exercise use, only for meditation. The feature is called Moment, and it’s available only on iOS for now.

UPDATE November 2019: Moment is now available on Android as well.

Silver rings with PVD coating are not scratch resistant

Second generation Oura rings are made out of titanium, and have either diamond-like carbon (DLC) or Physical Vapor Deposition (PVD) coating.  Numerous accounts have praised the scratch resistance of the first generation rings, claiming that they wear them at the gym and even deadlift with the ring on. Well neither Oura or I will recommend doing that with the new ring, since at least the silver ones get scratches very easily. I have to say that after all the positive reviews of the first generation ring’s coating, this was a major letdown. Granted, most of these scratches are so small that others wont even notice, but you’re the one who has to look at the ring everyday, and at least I wish this 300€ gadget would stay prettier for a longer time. 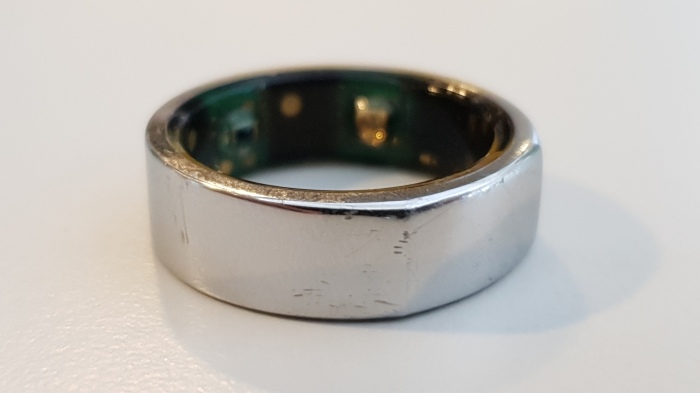 No smart alarm, but why though?

Yeah yeah, Oura doesn’t vibrate or have blinking lights. But it would be really convenient if you could input a time range when you’d like to be awaken, and then when Oura detects that you’re in light sleep within that time frame, it would just engage the phone’s integrated alarm clock. Apps such as the highly popular Sleep Cycle already does this, but their sleep cycle analysis are based only on phone’s accelerometer and microphone. This is obviously inferior method to Oura ring’s tracking, plus with Sleep Cycle you’d have to keep the phone on your mattress, next to your head, which is far from ideal. This could be an easy win for Oura.

Adding notes / tags is useless as of now

At first glance, it seems like a great idea to tag your day with things like “late

bath or hot sauna” or “sick day” or “alcohol”. These all have an effect on your sleep, and with any variable like this, it would be good to look at e.g. sleep statistics from nights after sauna and compare those to nights which previous day haven’t been tagged with sauna.

But guess what? It’s not possible. As far as I know, it’s not possible to even search for days that are tagged with anything, not even in the Oura Cloud. So right now, adding a note doesn’t even serve a purpose (unless you want to manually scroll through each day in the past, in the app view, and try to cross reference data that way).

This is not really a big thing, but more like a nice-to-have. Oura talks a bit about parasympathetic and sympathetic branches of the autonomic nervous system on their website, but very little of this differentiation and their meaning is brought back to the app. One of Oura’s main competitor, Elite HRV, excels in this area (as they should, it’s in their name after all). I really like how Oura gives feedback also in text format instead of just numbers, so perhaps more detailed (HRV) information is something that could feed into that.

Despite these negatives, I’m not aware that there would be any better options for a sleep and recovery tracker. Plus, you just can’t beat the convenience of the ring form factor. I’m going to continue using my Oura 24/7/365, but I also hope that it gets improved over time.

If you’d like to buy an Oura ring, here’s my referral code which you can use to get a $75 / 75€ discount of your purchase:

This site uses Akismet to reduce spam. Learn how your comment data is processed.